Most people don’t normally think of the vital services that doctors, nurses and other healthcare workers provide. As conscientious, compassionate and dedicated individuals they are the gatekeepers to the world of creature comfort when it comes to convalescence and often are the MVPs when life hangs in the balance.

Jefferson College of Health Sciences held its inaugural Education Foundation Luncheon May 12 that coincided with International Nurses Day, i.e., the birthday of Florence Nightingale–one of the most revered personalities in the field of nursing.

The affair, held at the Patrick Henry Ballroom in downtown Roanoke, focused on the accomplishments and the mission of the college itself and recognized 4 professionals in the field who received the institution’s first alumni awards.
“Today we celebrate all healthcare professionals and Jefferson College of Health Sciences in its roll to educate those professionals,” JCHS president Nathaniel Bishop said during opening remarks to the ballroom packed with distinguished alumni and various local and state officials.

Nancy Howell Agee, is president, CEO of Carilion Clinic which owns and operates eight hospitals in western Virginia. “Jefferson College is one of our shining stars,” she said and confirmed its position “at the intersection of healthcare and education,” to emphasize Carilion’s mission and overall focus.

As guest speaker, Nikki Giovanni, renowned poet, author, activist and educator delivered a moving address that was both enlightening and entertaining. 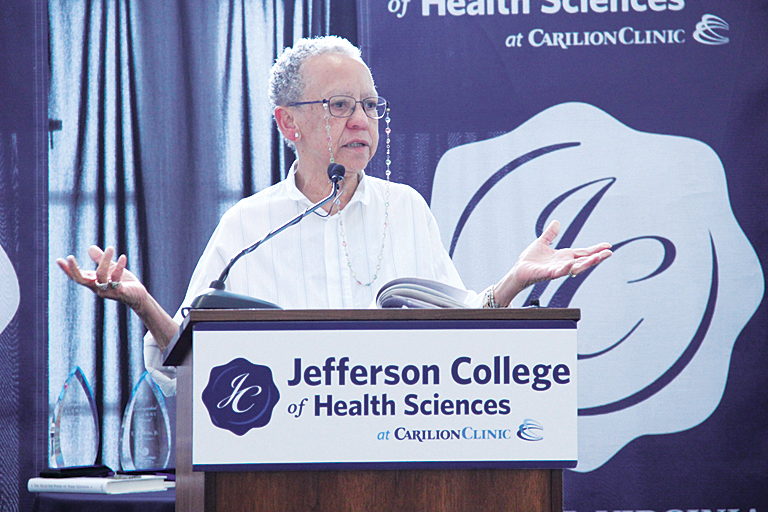 In accordance with the luncheon theme, Giovanni said that some of her favorite people were nurses. This fact has been most significant to her considering certain health issues, a bout with lung cancer and later a brain tumor, both experienced over the last 10 years.

Because her surgeon was trained in Roanoke, she said she owed her life to the area and quipped, “I’m not a druggie but it sure is nice to be “out” (under the influence) when someone is cutting on you.”

After the operation through which several ribs were removed she told the doctor, “You could have taken out my whole spine because I’ve known a lot of spineless people and they get along just fine.”

Speaking with an affection clearly rooted in gratitude she said, “I love nurses, there’s just nobody like them. They took such good care of me that when they told me I could go home, I cried.”

Leaning more to words of wisdom reflecting on the times, she spoke about the current “junk generation” and our obsession with junk food. “One of the things that keeps you healthy is the food that you eat,” she said and also mentioned “the people that you love,” as another significant factor. “I don’t think anybody has the right to say anything about who somebody else loves.”

As a Virginia Tech professor Giovanni spoke emphatically plugging the arts (i.e., theatre, poetry, dance etc.) as contributing to good health and expressed her desire to keep it all alive particularly as her institution currently struggles due to corporate fracturing.

Giovanni closed her address reading an adorable (original) poem “When God Made Mountains.” She boldly prefaced the reading saying “The nicest White people in America are Appalachians.” She delicately tipped through the poem’s verses and teared up toward its touching end–nothing short of a quintessential class act.