Sustaining consistency as a high school coach year after year is no easy task. Most would agree, however, that a coach’s legacy can never be defined by just stats alone.

“Coach Miller hasn’t just been a mentor to countless athletes over the years; he is also a much-respected community leader and educator,” Ryan Brown, a former William Fleming athlete, said. “His legacy is forever cemented throughout Roanoke Valley and beyond.”

“It’s been over 25 years since I was in high school. I still use the advice coach gave me to this day. I feel like I speak for a lot of people when I say it was an honor to be coached by him,” said another former Colonel athlete Desmond Clark, who spoke about Coach Stuart.

Coach Stuart grew up in Floyd County and moved to Roanoke when he was in the fourth grade. He graduated from Lucy Addison High in 1955 and from St. Paul’s College in Lawrenceville, VA, in 1961. For nine seasons, 1986-94, he was Fleming’s head football coach.

“Many memories went through my head as I accepted my honor in front of friends and former players. I can’t put it into words,” said Stuart.

George Miller served as a Hall Principal for 14 years and a health and physical education teacher for 16 years. In June 2009, he retired from the Roanoke City Public Schools system after 35 years.

“I wouldn’t be here today without so many people. I’m humbled. I’m thankful. I’m blessed,” exclaimed Miller who for years has been known as “Kila” Miller.

Over the many years they have guided students, both Miller and Stuart have coached several athletes who have earned full athletic scholarships to college.

Because of his allegiance to the students and the mission, Miller spoke about the school’s football team regarding their present record. He says his coaching style “placed heavy emphasis on the fundamentals of the game.”

“The talent level is obviously there, and they are very well coached. I would just tweak a few things,” he explained.

Neither Miller nor Stuart said they ever entered a contest they felt they could not win.

“No matter how talented my roster was, I knew no team worked harder than us. A good coach shows his players how to win. A great coach gives them the confidence that they will win,” Miller said.

“Whether it was at home or on the road, I always knew that I had top-notch competitors who weren’t afraid of anything or anybody,” Stuart added.

Neither legend thought they would ever receive such an honor when they started their coaching careers.

“I think I speak for Sherley when I say that without our former student-athletes, the community and support from the school, none of this would be possible,” Miller said. 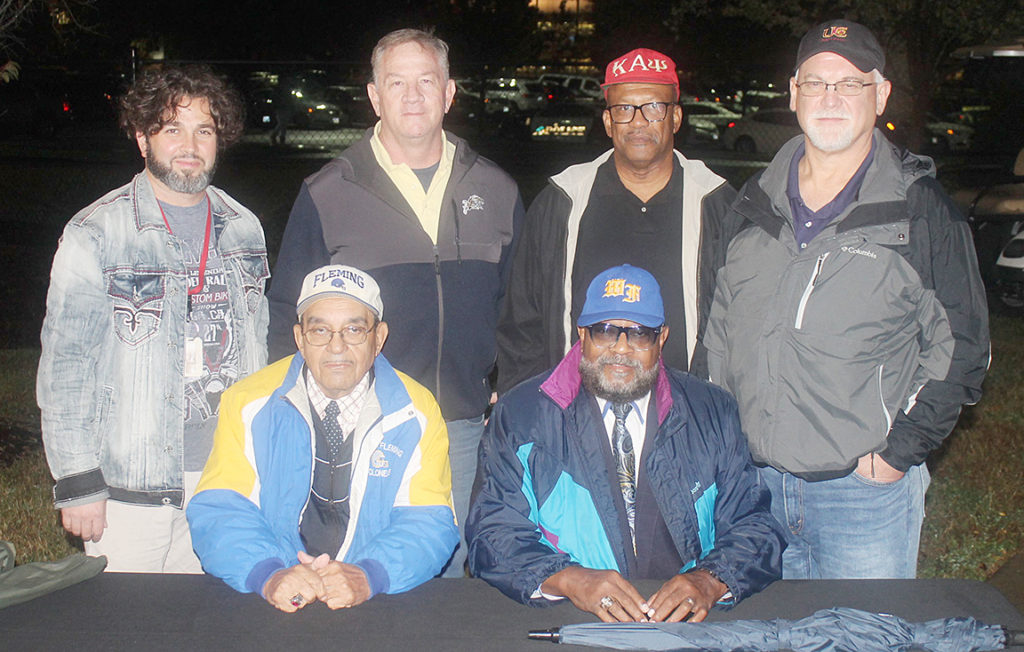 Suffice it to say, that it was their (both coaches) approach as principled leaders and their heartfelt loyalty to their ideals that led to the honor–presented to each of them at half-time in what is now known as “George Miller Stadium” at William Fleming High School.