The world is full of kids that look forward to Christmas, understood by many as the most wonderful holiday of the year. And then there are those more unfortunate who never truly experience the joy’s and wonder of it all.

For ten years, Apple Ridge Farm (ARF) in conjunction with Aladdin Temple #111 and Daughters of Isis join forces for a Christmas party to lift the spirits of a group of lucky kids who gathered Saturday, Dec. 8 at the hall on Salem Turnpike in northwest.

This year Shiloh Baptist Church, Salem joined the list of supporters contributing funds for computer tablets that each child received.

Speaking for his son and current camp director John Lewis, Apple Ridge founder and former director Peter Lewis pointed to the significance of the yearly function.

“This event is very special to me because you have several African American organizations who are stepping up to the plate to help our community in a big way.”

Lewis also emphasized the importance of giving tablets this year instead of bicycles that have been such a tradition at the celebration.

While everyone dined on pizza–every child’s favorite, they all had a chance to have photos taken with Soul Santa (aka Harold Young). “I do this every year,” said Young who seemed to enjoy the festivities as much as the kids.

The children’s faces glowed with gratitude as they eagerly stepped up to receive their complementary gift presented by Donna Davis, director of administration, ARF.

One of several women at the affair was Odessa Mapson who had a small entourage of kids tagging along that occasionally seemed totally immersed in all the celebration has to offer. 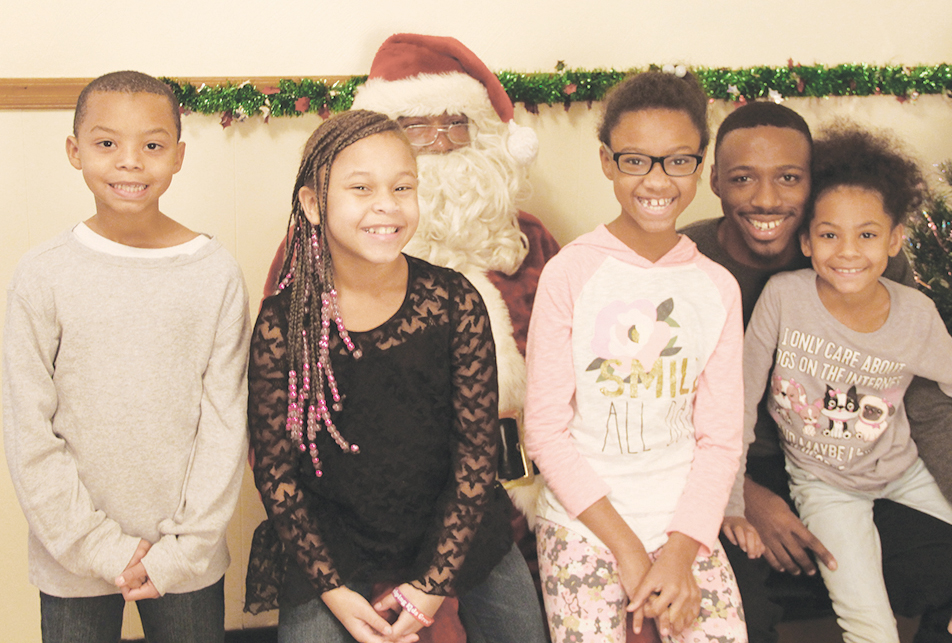 She pointed to two of the four children with her and said they had recently lost their mothers. Two others were son’s of a young man she adopted but now they were hers to raise and she seemed up for the task.

“I’ve got a lot of brokenness here,” said Mapson speaking of the hardships faced by the children who accompanied her.

“Some people are born to do certain things and whatever God wants me to do, I’m gonna do. I’ll fuss, slap their legs, tell’m to sit down and love’m all the same,” she stressed lovingly.

“Some children don’t have these opportunities and many of today’s parents don’t think the young people need such positive activities, (as the Christmas gathering), said Mapson. “This is wholesome.”

Civilization is paved with the guidance from strong women–who for the most part–raise the children. Thanks to the assistance from various benevolent and principled organizations as Apple Ridge Farm and the Shriners, the celebration may be the only joy a child experiences at Christmas.