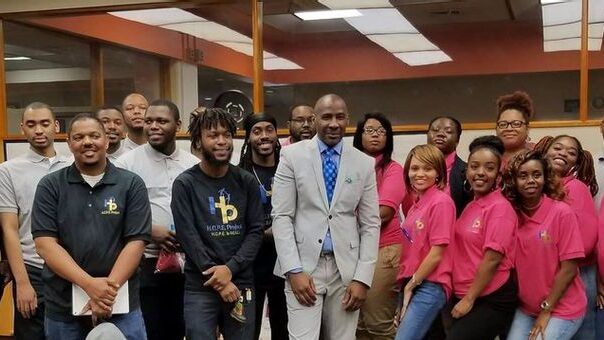 WASHINGTON — Situated east of the Anacostia River in Washington, D.C., Ward 8 is historically one of the poorest and most violent parts of the city. And while redevelopment dollars are slowly trickling into the area, and crime stats are moving downward, its residents can still fall victim to the social ills that plague many big cities: high unemployment, continued violence, teen pregnancy, poor access to healthcare and homelessness.

Yet for the last decade or so Raymond E. Bell has been doing his part to break the area’s cycle of poverty, and give its youth opportunities to launch careers in an ever-growing industry.

Bell is founder of the H.O.P.E. Project, a six-month training and internship program that prepares those aged 18 to 24 years for careers in information technology. Since 2009, the H.O.P.E. Project has helped more than 2,000 students get high-paying jobs as help desk support specialists, cyberspace experts, system administrators and the like with such global companies  as Lockheed Martin, Northrop Grumman, CACI, Chase Bank and Bank of America.

At the completion of the training, its students earn certifications through Microsoft, CompTIA and the Help Desk Institute, giving them the requisite credentials to enter the job market at a decent salary.

Considering the humble backgrounds of most of his students, Bell said he is most proud of how they have come together as a support system for each other.

“If a student has an interview with the State Department, for example, they can look into our student portal and reach someone that works there,” he said. “So, when he or she goes to that interview, they’re going to know everything about the organization. And, the person that coached you and mentored you, you’ve never met. It could be a $90,000-a-year cybersecurity engineer, but they’re going to help because someone did the same for them.”

Bell was quick to point out, however, that this “community of professionals” is not a cadre of college-educated, middle-class folks.

“We’re talking about kids who were selling weed, girls getting pregnant at a young age, working in fast food or retail, or even returning citizens,” he said. “These aren’t the kids that went to Spelman [College] or Morehouse [College]. I’m talking about the ones that went to D.C. public [high] schools like Anacostia or Ballou, and grew up in [public housing projects such as] Woodland or Barry Farms.”

Coming from a similar background, Bell said he can relate to his students. Born in small-town Dillon, S.C., he came to Washington, D.C., at the age of five with his single mother and two sisters, eventually graduating from Ballou in 1985.

Right after high school, Bell began a long federal government career with the U.S. Department of Agriculture, before leaving in 2003 to launch his own training, consulting and project management company. He opened his first training center in 2005 that, he said, fell victim to a bad economy. He later took a position with a local public affairs firm, DDC Advocacy.

“I stayed there until they fired me, which was justified, because I was spending all of my time on the H.O.P.E. Project,” he said.

Hailed as one of the best IT training programs in the country by The Help Desk Institute, the H.O.P.E. Project has been featured on several media platforms, including Ebony magazine, ABC, CBS, Bloomberg News, The Washington Post, National Public Radio and BET.

“I have no formal education beyond high school,” Bell said. “But I have a Ph.D. in results.”

“It’s simple; they teach real-life skills,” said Chioma Obi, a talent consultant with the Anne Arundel County (Md.) Workforce Development Corp., which selected Bell’s team as its IT vendor in 2020. “[We selected the H.O.P.E. Project] because their model is ‘train and place,’ not the conventional ‘train and pray.’ They have the subject-matter expertise, the years of experience and the depth of knowledge needed to assist trainees who successfully pass the training.”

When Thaddeus Miller was discharged from the military a few years back, he had limited options regarding how to jumpstart the next chapter in his life.

“The program was my life raft when I was sinking in the ocean,” he said. “I literally had exhausted all my options at the point that my mother came across a flier for the H.O.P.E. Project. Without it, I really don’t know where I could be in life.”

Today, at an annual salary of $244,000, Miller is working as a contract systems administrator in Afghanistan alongside active-duty soldiers and, as American forces draw down in the region, as the facility control officer responsible for addressing outages across all the military installations in the country. While he said that he appreciates the training he received through the H.O.P.E. Project, Miller is more grateful for the community of professionals that Bell describes.

“This is about more than just getting training for a job; it’s a family and community of brothers and sisters that help each other excel, which is the meaning of hope [for me],” Miller said. “You can’t copy hope in any capacity. It’s like trying to recreate the magic of the first ‘Black Panther’ movie, or the Chicago Bulls of the ’90s; it can’t be duplicated. I love Mr. Bell, and I’m happy that someone like him made a choice to put himself in position to help a person like me.”

D.C.’s government previously provided program funding for 40 H.O.P.E. Project students per year, at a cost of $200,000. However, the COVID-19 pandemic has slowed that funding, according to Bell, causing him to take drastic measures.

“For the last 11 years, our training program has been primarily funded by District government agencies,” Bell said. “But, for the first time in 12 years, we’re going to have to charge people for our services. But it’s less than $1,000.”

The office of D.C. Council member Elissa Silverman (I-at Large), who chairs the council’s Labor and Workforce Development Committee, was unable to confirm Bell’s estimation of the H.O.P.E. Project’s funding levels or provide any data on the outcomes of the city’s workforce development initiatives.

“Unfortunately, it’s hard to get good outcomes data on our workforce development programs, which is a goal of Council member Silverman’s,” said Chief of Staff Samuel Rosen-Amy. “She did pass legislation creating an annual expenditure guide, which is supposed to have performance information, but largely doesn’t.”

Rosen-Amy added that the council will begin work next month on the city’s annual budget, which Bell said he expects to contain funding to support 60 students in his program.

(Edited by Stan Chrapowicki and Matthew B. Hall)