As part of the fanfare in celebration of its 100th anniversary the Roanoke Kiwanis Club cut the ribbon Sunday, Aug. 30 to a new playground in northwest Roanoke near the intersection of Melrose Ave. and 24th Street NW adjacent to the new Melrose Branch Library.

After years of preparation involving deliberations, planning and a capital campaign that secured major funding through federal community development block grants, area businesses, organizations and many churches. Through all funds, the dream has become a reality for area residents. 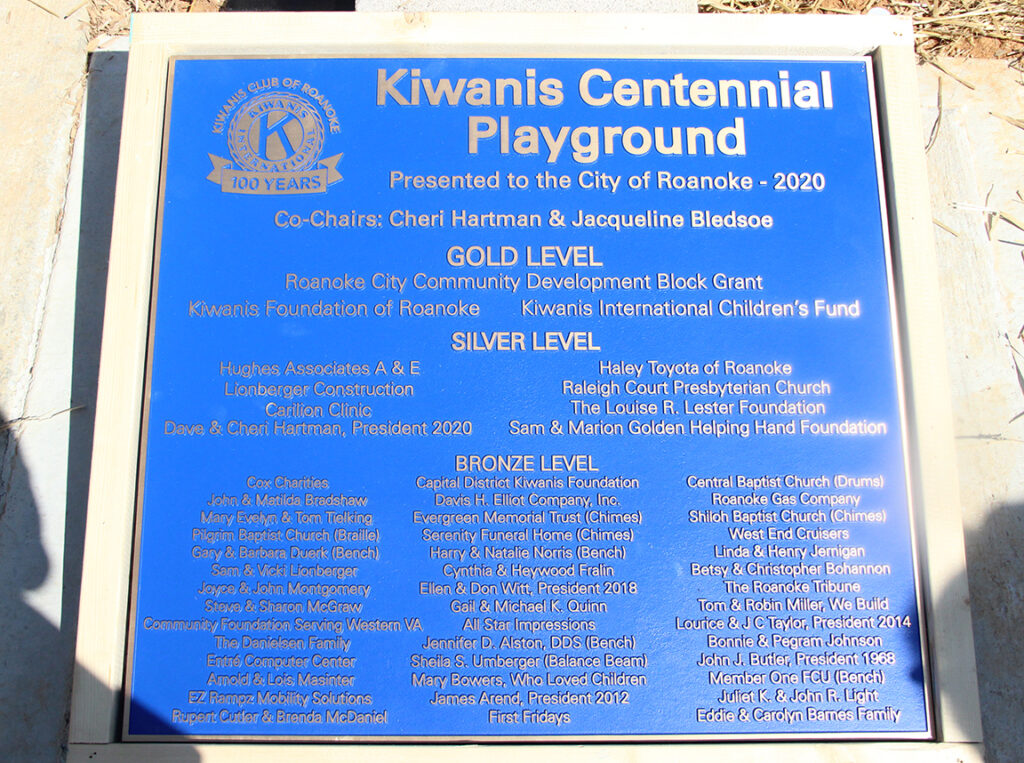 Officially known as the Kiwanis Centennial Playground, it is the result of a $400,000 project the club launched over four years ago headed by club president-elect Cheri Hartman – a psychiatrist with Carilion Clinic.

“This playground is a celebration of the organization’s 100 years of service,” said Hartman. “It would not have happened without a groundswell of support throughout this community.”

The lengthy ribbon was adorned with miniature flashlight/key ring medallions that were inscribed with the organization’s 2020 motto ‘Be the Light.’ It was cut into seventy pieces and offered to many of those who help bring the project to fruition. T-shirts were also offered.

“If there ever was a year for those of us to rally around and “be the light” it is surely 2020,” Hartman said.

The ADA compliant (Americans with Disabilities) playground spans almost 900 sq. ft., and is equipped with a sizable number of swings which was an issue raise by area residents as being of major concern–considering the old playground had very few.

“There are no adjectives to express our gratitude to so many who have made this facility possible,” said Jackie Bledsoe, playground committee co-chair who proceeded to thank the multitude of those who contributed monetarily and with hands-on assistance.

“This city is extremely pleased to be blessed with this playground as a gift presented by the Kiwanis Club of Roanoke,” said Mayor Sherman Lea. “We salute the committee and its efforts identifying the need in this community to provide a place where children can be active and play together outdoors.”

Some may see this project as simply a gross waste of funding and resources’ considering the perilous state of affairs the world is mired in.

Then there was the City Mayor who offered a more idealistic viewpoint.

His comments highlighted in great detail the dynamic benefits of children learning to interact with each other while enhancing critical developmental skills as learning to play fair–seemingly a lost virtue.

Also among the city officials was councilwoman Trish White-Boyd who is always “on the scene.”

“There is nothing in the area like this playground. For the Kiwanis Club to first identify the needs and then rally the support from the entire community – the businesses, churches, organizations and individuals as well to make this happen, its amazing!” Boyd said. “I think the kids and the adults in that neighborhood are going to appreciate it for years to come.”

J. C. Taylor, a prominent local realtor who, has been a Kiwanis member for almost 20 years and served as president at one point.

“This project has been one of the highlights of the club for several years,” he noted. Taylor worked diligently, not only soliciting funds but engaged in hands-on assistance leading up to the celebration.

“To see the kids get something like this placed right in their neighborhood makes it all worth the time and energy spent on the committee working and planning to make this happen.

“As we say in the Kiwanis “‘It’s about the Kids.”’ In his closing comments he said. “This is a gift that will keep on giving.”

Among the many in attendance was an army of supporters who also donated there time and energy as well as monetarily.

The day, weather-wise was picture perfect– however, for those who found it to be a little on the hot side, the Freedom First ice cream truck was on hand with free refreshments.

As Mayor Lea often says, “It was a great day for Roanoke” and particularly so for the residents of this vibrant northwest community as it transitions to a more user friendly neighborhood–thanks to the altruistic efforts of Roanoke’s Kiwanis Club!